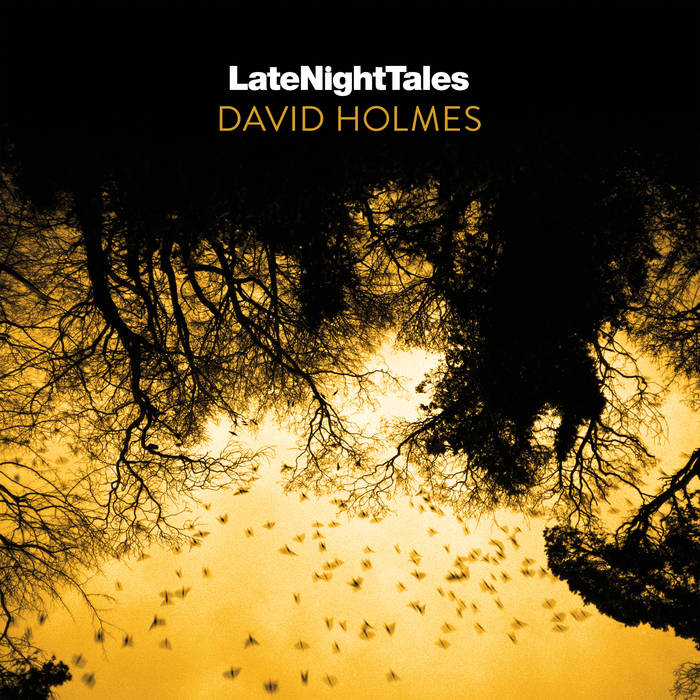 Was Ist Das? Beautiful mix of wonderful obscurities. Possibly the finest mix in the whole series yet. Mind-blowing, relaxing and educational. Hats off for David Holmes Favorite track: Henry McCullough.

Mister Meows A great mix of weird folk and ambient and goodness-knows-what, as well as a backdoor ad for the Moine Dubh 7" series. The Stephen Rea spoken word is a killer. Favorite track: It's In Every One Of Us.

Music From The Mezzanine

DJ and producer David Holmes is welcomed to the Late Night Tales fraternity with an evocative collection of personal songs and music, peppered with exclusive new material and rare gems.

His most enduring and vital source of musical inspiration - cinema - plugged into David’s first solo record ‘This Film’s Crap, Let’s Slash the Seats’ and inspired 2000’s ‘Bow Down to the Exit Sign’; created as the soundtrack to a not-yet-made movie. Official soundtracks have been bountiful, including scores for Soderbergh’s Out Of Sight and Ocean’s trilogy, '71, Hunger and Good Vibrations. In a series of personal songs sung by himself, David’s last solo album ‘The Holy Pictures’ explored influences of La Düsseldorf, The Jesus and Mary Chain and early Brian Eno. His Unloved collaboration with Keefus Ciancia and Jade Vincent then took us on a musical journey full of raw 60s pop-noir, psychedelia and French Ye Ye with a contemporary twist. Somehow he’s also found time to produce records by Primal Scream and Jon Spencer Blues Explosion.

Unsurprisingly, for someone au fait with matters cinematic, this Late Night Tales conjures up its own mind-movies. It’s not only packed with the judiciously selected nuggets for which his mixes are noted but also stuffed with original material, including collaborations with BP Fallon and Jon Hopkins and an amazing new reading of 10cc’s ‘I’m Not In Love’ by Holmes-produced Song Sung. In fact, there’s a Celtic thread running through the whole journey with Stephen Rea’s reading of an extract from Seamus Heaney’s AENEID BOOK VI - Elsewhere Anchises. Among the other gems included here are David Crosby’s lush ‘Orleans’, Buddy Holly’s celestial ‘Love Is Strange’ and the Children Of Sunshine’s ‘It’s A Long Way To Heaven’.

David Holmes loves music. It’s a way of expressing the sometimes inexpressible or the inconsolable; a questing desire to find out just what is over the next hill. It’s no surprise to learn he’s a keen walker. Always on the move, headphones on, lost in some reverie or piece of music; the soundtrack to his life, the stuff that feeds his imagination.

“I walk a lot. It’s amazing for listening to music: your phone or your emails aren’t going and you’re just in the forest listening to music. It’s so intimate. Anyway, I was listening to the KLF’s Chill Out album, which still sounds amazing, but it triggered an idea with concrete sounds through travelling and movement. And one of the things I was trying to do was to use this idea not just break up the moods but also as a metaphor for moving through life and arriving in different destinations or arriving at different stages in different parts of your life.

Memory, Love, Living, Family, Friendship, Healing, Death and The Afterworld are some of the themes I wanted to explore within this record. Although these strong themes and tracks are personal to me, I also wanted it to be a great listen that was unpredictable yet had a seamless flow - a journey that was personal to me yet to the listener a great compilation of music that they may or may not have heard before. I hope I’ve succeeded in the later.”
David Holmes 2016